Difference between DOWA and KNW

Valuable addition to the KNW-atlas

The KNW-atlas contains climatological and hourly undisturbed wind data (without wind turbine wake effects) based on more than 40 years (1979-2019) of re-analyses data. The wind speeds in the atlas have a climatological accuracy comparable to that of wind measurements. So if you are interested in long-term statistical values such as averages and extremes, the KNW-atlas is hard to beat. However, due to the applied method to create the KNW-atlas, the hourly correlation with measurements (e.g. daily cycle) is rather poor.

Also, the KNW-atlas lacks information above 200 meter height and information that enables further downscaling with Large Eddy Simulation (LES) methods. The Dutch Offshore Wind Atlas (DOWA) presented on this website is a 10 year climatology (2008-2017) with a better hourly correlation than the KNW-atlas, information up to 600 m heights and the option to downscale the information in DOWA from hourly to less than 60 seconds and from 2.5 km to less than 100 m horizontally. Also the domain is larger than that of the KNW-atlas, including the areas where the German wind farms are (being) built and planned (see figure 1). 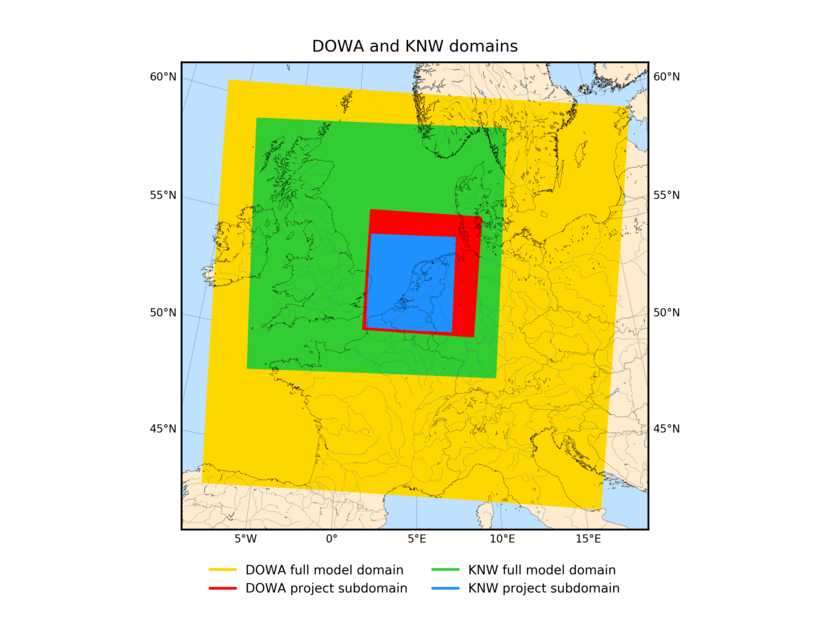